Chipmakers around the world are filing more patent applications in hopes of gaining the upper hand in the industry of the future.


The latest technology appearing in patent applications is the Gate All Around (GAA) technique.

The GAA architecture was developed to increase the transistor density of chips and improve power efficiency. The design allows for expanded and more flexible current flows Channels on transistor gates compared to the widely used FinFET technology.

While Samsung’s performance may give it an edge over Taiwan’s TSMC, the surge in TSMC’s patent filings shows the company is unlikely to give up.

Having as many patents as possible is considered a strategic advantage in the technology industry. 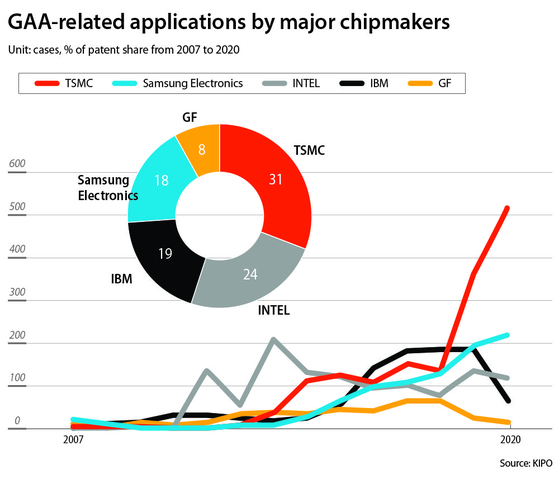 In the period from 2007 to 2020, TSMC’s share of the total number of patent applications worldwide was 31 percent, followed by Intel with 24 percent and IBM with 19 percent.

TSMC’s foundry market share was 53.6 percent in the first quarter, while Samsung Electronics’ was 16.3 percent. 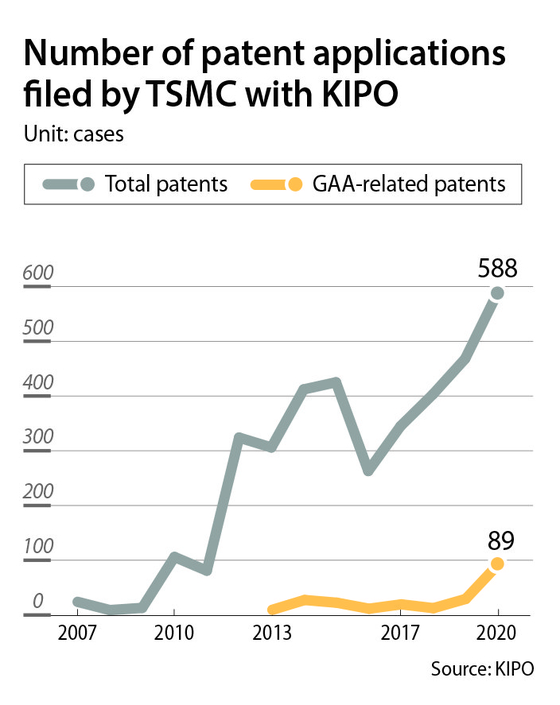 The views of the semiconductor industry on the filing of patent applications by TSMC in recent years have been divided.

Some say that this will not affect the mass production of Samsung Electronics’ high-spec products at all, since the technologies are applied differently by each company.

However, some worry about the longer-term threat to Samsung.

“Patent filings by other competing companies can be a barrier as Samsung Electronics tries to advance its technology,” said a spokesman for a semiconductor company, who asked not to be named.

“It is evident that TSMC is keeping an eye on Samsung Electronics as it has filed more patent applications in Korea, although Korea is not its main market.”

“More patents would lay a stronger foundation for the future.”

While these chipmakers strive to file as many patents as possible, where they file them is also important. The number of patent applications filed by both Samsung Electronics and TSMC from 2019 to 2020 decreased in China but increased in the United States.

The company is currently building a chip factory in Kumamoto, southern Japan, with $3.5 billion in subsidies from the Japanese government. The company also opened an R&D center in Ibaraki near Tokyo in June.

According to KIPO, TSMC became more competitive after collaborating with Japanese companies on chip packaging. 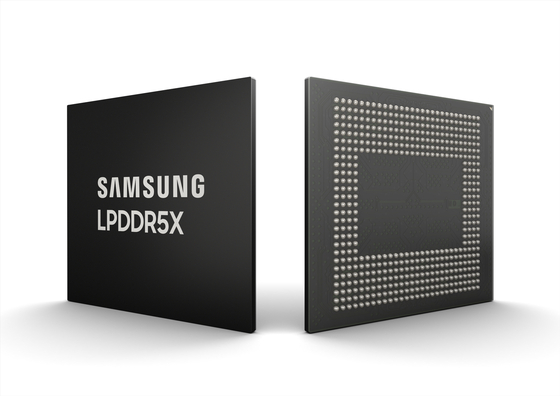 The competition for patents is remarkable for memory chips.

Samsung Electronics and SK Hynix are two of the major players in memory chips, but competition between large global companies is increasing when it comes to DRAM alternatives and processing-in-memory (PIM) chips.

Samsung Electronics and Micron are the two leading companies in patents for PIM chips.

The DRAM alternatives like FRAM are led by Micron and MRAM by TSMC.

As the patent war rages on, some say Korea needs to improve its patent approval system. His experts reviewing applications are overworked.

“Since patents are about professional technology, reviews should be conducted by people who have worked in the relevant industry and technology,” said Lee Chang-han.

In Korea, patent application examiners each examined 206 applications in 2020, compared to 58 patent office examiners in Europe. There are 73 in the US, 91 in China and 164 in Japan.

A Korean examiner spends an average of just 10.8 hours examining a patent application, compared to 17.7 hours in Japan, 22 hours in China and 27.4 hours in the United States.

The number of Types of technology that each examiner must deal with is 81.1 for Korea, the highest among these big five countries.

“More patent applications are coming in, but there are delays in the examination process because there are not enough examiners,” said a spokesman for KIPO.

“We will hire retirees from relevant industries as examiners to improve the quality of patent examination,” Lee In-sil, commissioner of KIPO, said during a July 7 press conference.